Despite it being the hottest July for many years our Summer Show held in conjunction with Kent County Show was a great success.

Visitor numbers were a little down on last year which could have been due to the intense heat or a certain football match taking place on the same day.

Although some birds weren’t put forward because they were moulting the entries for both the show on the Saturday and the Regional Egg Show on the Sunday were high and our judges, Louise Carpenter and Ian Simpson, had a hard task picking winners. Once again Nobby Clark won Best in Show with his German Langshan, with Jackie Bishenden’s white Call Duck a close runner up. Six cream bantam eggs exhibited by Helen Vicente were chosen as Best Eggs on Sunday with Barry Earley’s three white large fowl eggs being placed second.

Scenes from the Saturday Poultry Show

Scenes from the Sunday Egg Show 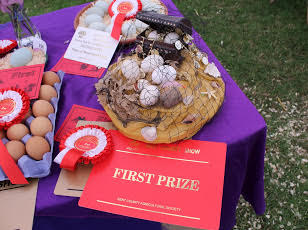